San Vitale between worship and iconography

On November 4th, Ravenna’s Church celebrates Saint Vitale. In our city, the saint is portrayed in the mosaics that decorate the apse of the church dedicated to him: Vitale receives the golden crown of  glory and martyrdom from the Christ Cosmocrator (Lord of the World) and he is presented to Christ by one of the Archangels, towards the Paradise’s joy.

In Ravenna, Saint Vitale was once venerated on April 28th, the day of his martyrdom. A letter of the pseudo-Ambrogio (late 5th century AD) tells that he was an officer from Milan who lived at the time of the Emperor Nero. Later, Vitale moved to Ravenna with the judge Paolino to persecute the Christians, but he secretly professed Faith by assisting and comforting those condemned to death. Vitale urged his friend Ursicino, a Ligurian doctor, not to renounce his belief out of fear. Ursicinus went peacefully to martyrdom by beheading. When Judge Paolino discovered that Vitale was a Christian and that he encouraged prisoners not to deny the new religion, he got furious and buried Vitale alive in a well, covering him with dirt and stones. Even today in San Vitale’s church we have memory of the site of his martyrdom, thanks to an oratory dedicated to the Saint here (5th century). The oratory was discovered in 1911 and presents the remains of an altar-reliquary (F. Di Pietro, Il prisco sacello di San Vitale, in “Bollettino d’Arte”, V, 6, 1925, pp. 241-253).

Some scholars are convinced that Saint Vitale revered in Ravenna was confused with Saint Vitale, servant of the farmer Agricola, both martyred in Bologna during the emperor Diocletian’s persecution (late III – early IV century AD) and celebrated on 4th November. In this way, was created a sort of splitting between the Bologna’s Saints Vitale and Agricola and the Saints Vitale and Ursicino of Ravenna. Ravenna’s bishop Saint Pietro Crisologo (426-450) affirmed that the proto-Bishop Apollinare was the only saint of the local Church who shed blood for Christ and he did not mention Saint Vitale. For this reason, the letter of the pseudo-Ambrogio about the legend the saint soldier from Milan, has to be considered as a later document (M. Mazzotti, S. Vitale. Storia e leggenda, in “L’Argine”, 5 novembre 1966). It is also stated that the splitting would have been generated in 409, when Galla Placidia decided to move the relics of Saint Vitale and his sons Gervasio and Protasio from Milan to Ravenna, favoring a cult in the new capital that did not exist before (G. D. Gordini, Vitale e Agricola, in Bibliotheca Sanctorum, vol. XI, Roma 1969, paragrafi 1225-1228).

On the other hand, other scholars dispute the thesis of the doubling: the distinction of the cult of the soldier Vitale and the doctor Ursicinus with the saints Vitale and Agricola from Bologna was very ancient and clear in the calendars of Churches in Milan and in Ravenna and, also, in the Roman Martyrology. The poet, bishop and saint Venanzio Fortunato, who lived in Ravenna between 550 and 565, wrote in his poems: “… Head quietly to the beloved city of Ravenna and passing by the sacred memories of the Saints, venerate the tomb of the blessed martyr Vitale and mild Ursicinus, blessed with the same fate … “. The devotion in Ravenna for Vitale from Milan and his family – together with Ursicino – is also shown in the two large mosaics of Saint Apollinare Nuovo’s church. The mosaics, dating back to the times of the archbishop Agnello (556-569), represent  the martyrs’ processions: Vitale, Gervasio, Protasio and Ursicino are depicted on the right and Vitale’s wife Valeria on the left (M. Pierpaoli, San Vitale di Ravenna e Ursicino Protomartire, in https://pierpaolimariostorico.wordpress.com). 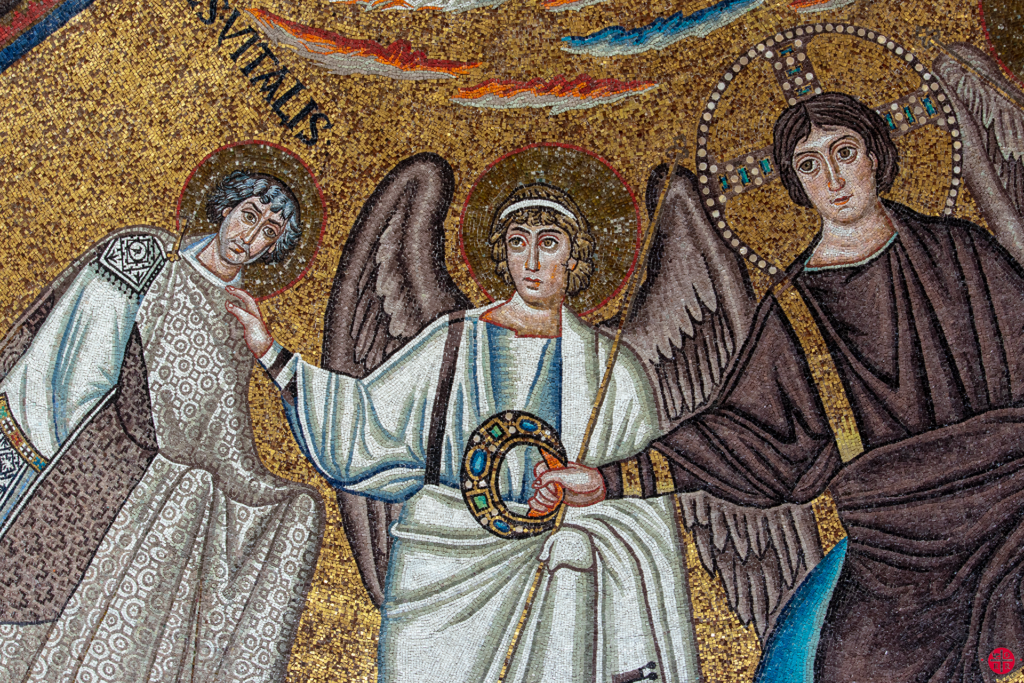 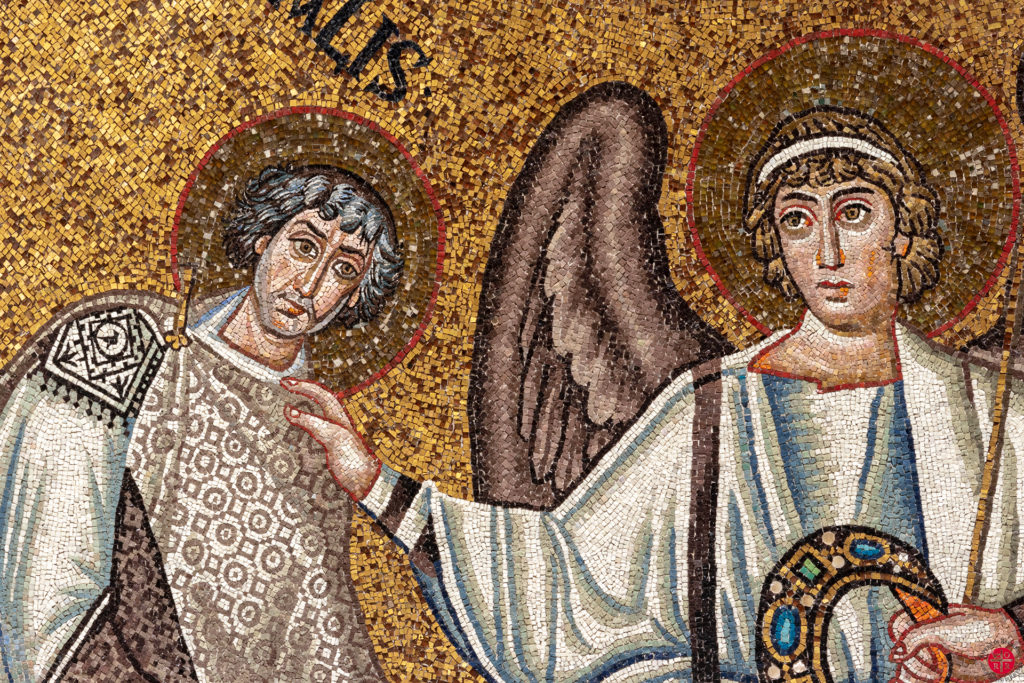 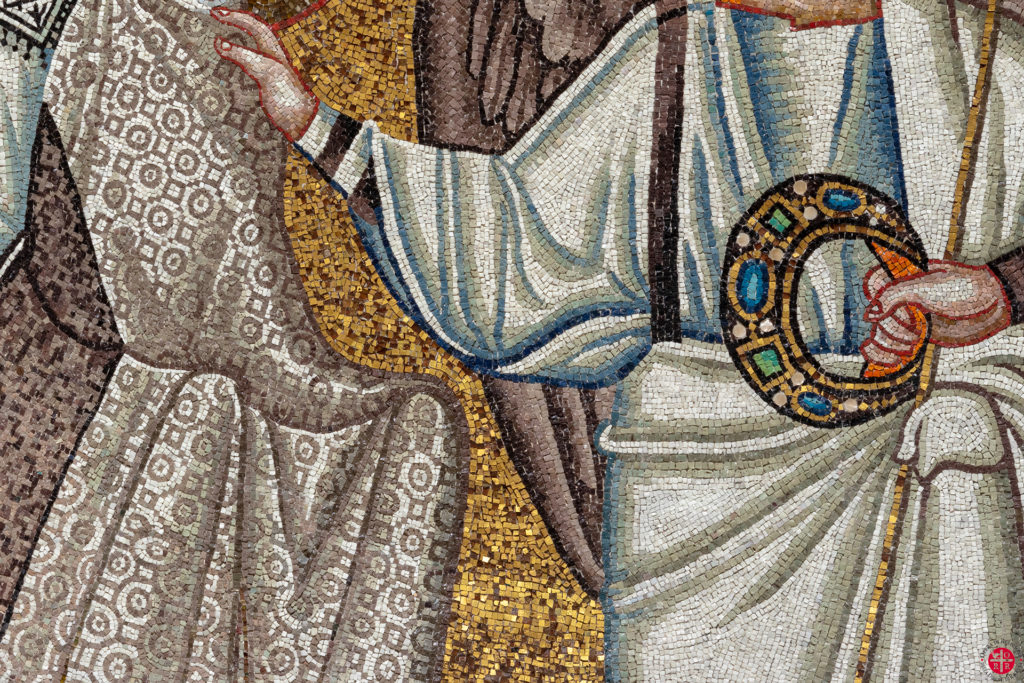 Gervasio and Protasio are also depicted in the mosaics of San Vitale’s church, in the under-arch that leads to the presbytery. Vitale, instead, is shown in the apse. Here, Saint Vitale presents itself with a sumptuous dignitary’s dress: a long cloak covers a white silk tunic, fastened by a fibula on the shoulder, and adorned on the side by a rectangular cloth, the tablion. Vitale receives the crown from Christ with veiled hands, as sign of respect. The Lord, seated on the globe, is dressed with a tunic and a purple-colored pallium, like a Byzantine sovereign. In this representation, the mosaicist was inspired by the rituals of the court of Constantinople, when an official was invested with his role by the emperor (L. Sotira, Eredità della tradizione classica nei mosaici parietali di V e VI secolo: problematiche di iconografia e di stile, in “Intrecci d’arte”, n.1, 2012, pp. 13-14). 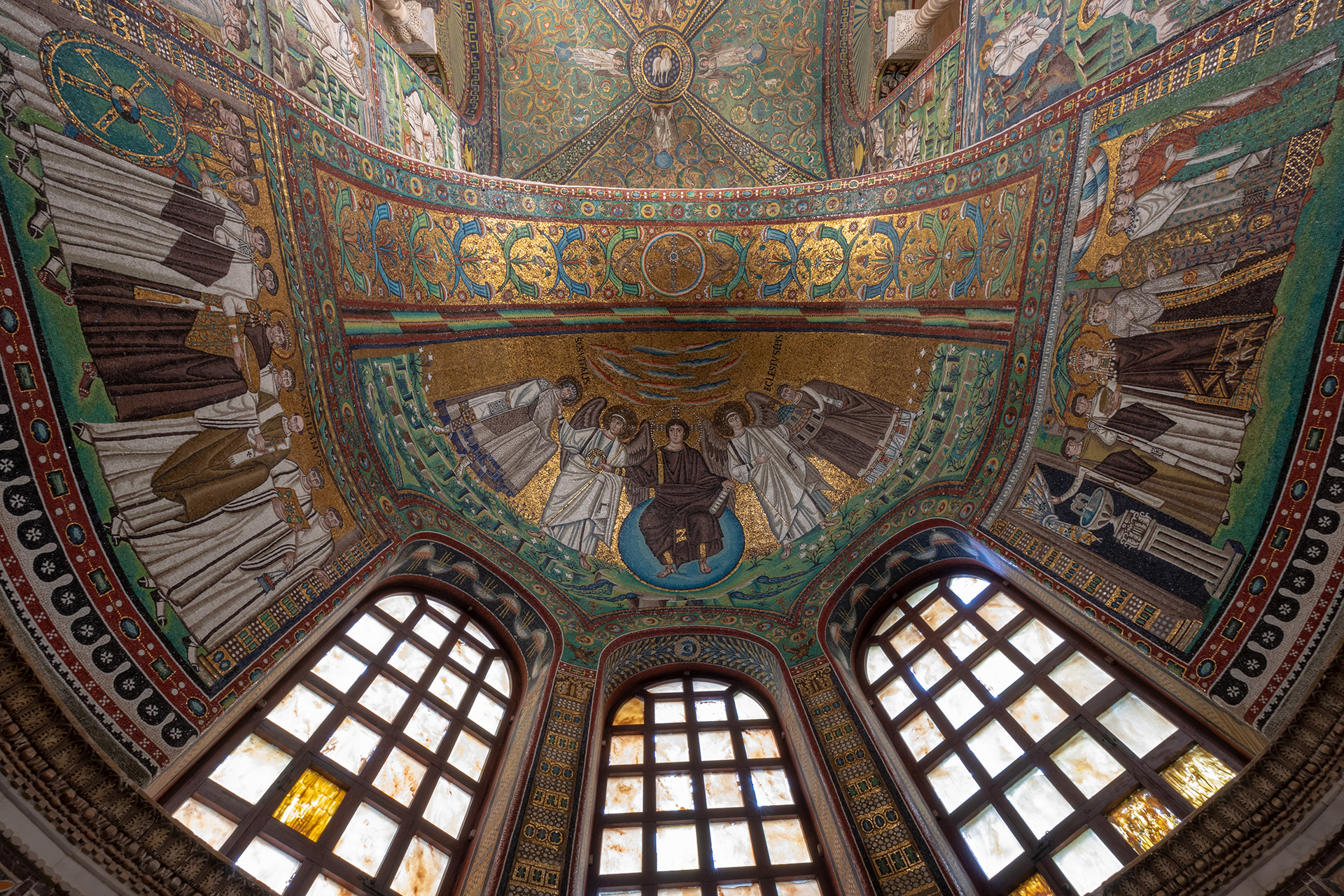